Welcome to Villa Moro Malipiero now owned by the Counts Rigoni Savioli. It is a villa whose name preserves the name of its previous owners who have succeeded each other over the centuries.

The Venetian nobles Moro Malipiero had the villa built in the second half of the 16th century and the current owners bought the villa in the early 19th century.

The Venetian villa is a type of patrician residence founded by the patriciate of the Republic of Venice and developed in the agricultural areas of the mainland domains between the end of the 15th century and the 19th century.

More than five thousand Venetian villas were built during this period, many of which are still well preserved today.

The entire Veneto region has some number of (villa palladiana) these buildings, in particular the Riviera del Brenta, and the plains of Friuli-Venezia Giulia.

Through the work of the architect Andrea Palladio in the sixteenth century, a specific type of Venetian villa was formed, identified with the name of Palladian villa: the Palladian villas of the Veneto have been included in the UNESCO World Heritage List. 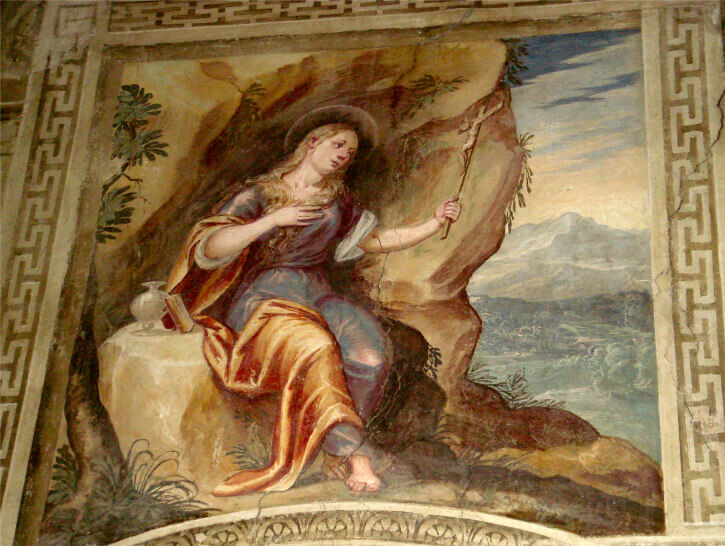 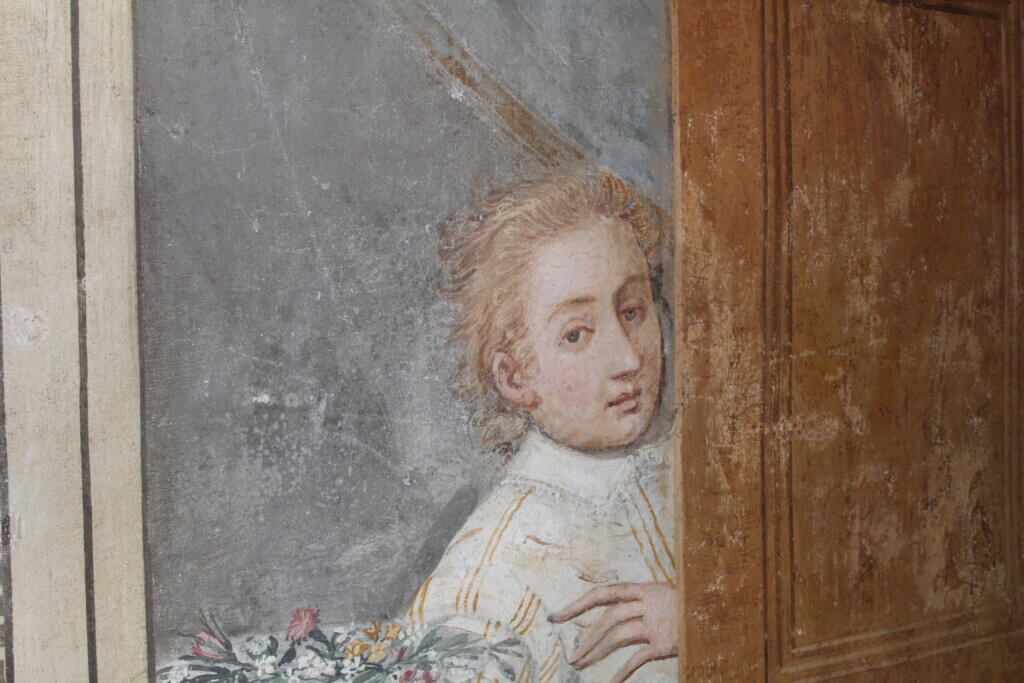 The Venetian conquest of the Veneto-Friuli mainland that took place between the 14th and 15th centuries, led to an ever greater interest in the Veneto-Venetian aristocracy for landed possessions.

The large properties were accompanied by large investments in agriculture, often derived from the mercantile income of families, that were then remunerated by the estates’ productivity.

The symbol of this “world” was the Venetian villa that combined both the aesthetics and grandeur of the stately home and the ancillary buildings for managing the surrounding estate.

This type of construction, unlike other systems of villas, had a dual function, both for representation and leisure and as a production centre.

As mentioned, this development took place also thanks to the Venetian mercantile fortunes: which, contrary to what the “legend” claims, were not aimed exclusively at the Mediterranean Sea; see, for example, the galleys that provided regular commercial service with Flanders, or the Venetian Baltic Company. 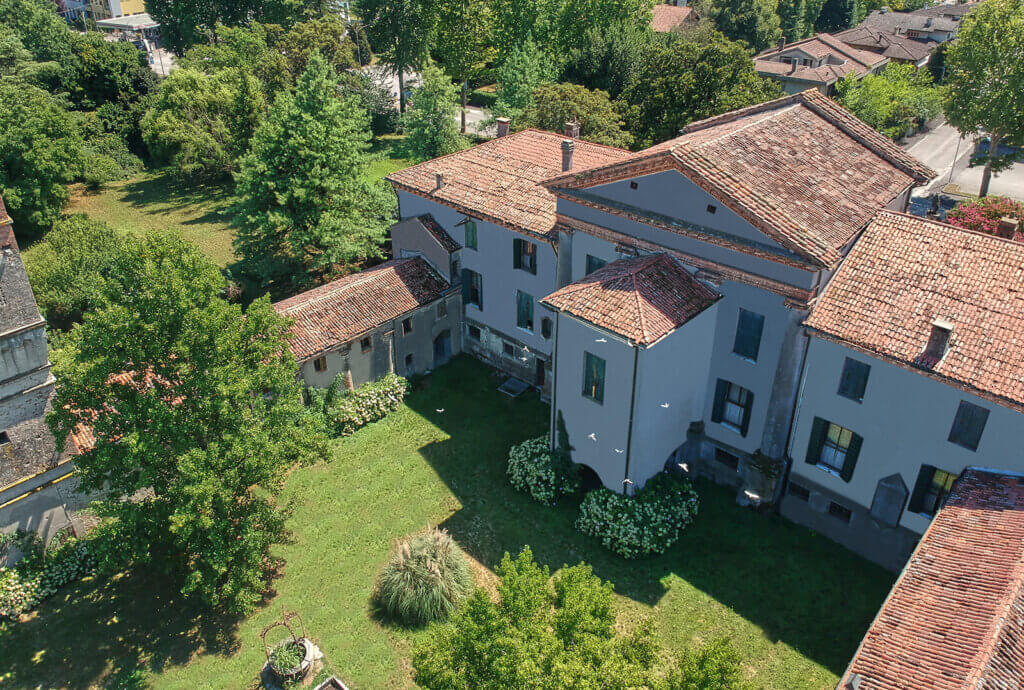 Hence, that Venetian need to return to the mainland and the countryside was also satisfied, which, in a city made up of narrow streets and lagoon horizons, had almost become a forgotten memory.

The structure of the mainland villa finds its base in castles, fallen into disuse and mostly located in raised areas of landscape value: starting from these architectures, the Venetian nobility began the conversion into a villa, adding an increasing number of elements stylistic typical of the architecture of the city over time, up to elaborating a model that has its apex in the villa Palladiana residences.

Thus the urban model and the rural model penetrate a cultural interchange that has continued over the centuries: the Venetian spirit is exported to the elegant residences of the mainland, while the love for the countryside and the hilly horizons especially influences the sixteenth-century art of Venice, as testified by the works of Giorgione and Titian.

After an initial period of real agronomic commitment in the area, the villa became a trend, spreading to the point that noble families spent gigantic wealth to build villas to be used only in summer, from the eve of the feast of Sant’Antonio di Padova, on June 13, until the end of July or at the latest until the harvest period.

The building of the villa lost its rustic connotations, increasing in size, equaling the internal splendour of urban palaces; it was also embellished by vast lush gardens of exotic plants and hedges pruned to design, where complex water features were created, tending in everything to rival international models such as the palace of Versailles of the Kings of France to which some wealthy landowners intended to be equal, sometimes consuming their entire family fortune in the process. 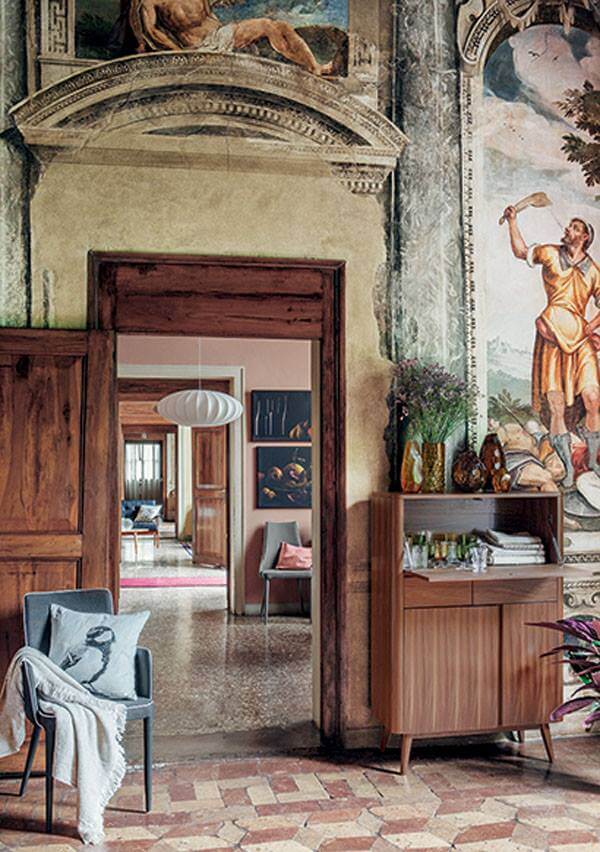 The typical structure of the Venetian villa is especially distinguished by the context where the architectures are placed: as a rule and according to its function, the villa was inserted in a large agricultural property.

At the centre of the architectural complex is the central body (or manor house), which was the residence of the owners, more elaborate and decorated as a representative place, as well as a summer holiday; most of the villas had no winter heating or kitchen systems. The model envisaged that in the vicinity or connected to the villa there were some outbuildings called barchesse, where work was organised: sculleries, peasant houses, stables and other rustic outbuildings.

In particular, the central body’s façade of the Rigoni Savioli villa has four semi-columns of Ionic order, which support a large pediment; the staircase, flanked by two Vicentine stone statues of Costozza, like those present on the three gates, leads into the central hall of the noble floor. On the ground floor, there is a splendid cellar with bas-relief faces with relative adjacencies.

The villa is surrounded by a garden and three orchards; equipped with barns and a dovecote tower. In the rear orchard, there is a thermal water well that was damaged during the last war. Another architectural jewel is the still consecrated church.
The grandiose party hall that once occupied both floors in the central part was divided in half after the French Revolution, leaving the upper part intact, while the lower part was divided into five sections.
Now you are in the main entrance hall one of the five rooms extrapolated after dividing the ballroom. This room is the main access to the main floor of the villa, if you look at the first two doors, near the entrance door, you will notice a series of rooms that allow you to admire from side to side all the beauty of the frescoed rooms. Behind your back, you have the entrance staircase in Costozza stone and in front of you, the access staircase to the enthralling ballroom. On the walls, you will find some works by Tono Zancanaro.

Although Italy is known for its inimitable style, delicious food, and incredible wines, it’s also known for its boisterous spirit. Italians are warm, talkative, and expressive. They live with gusto! From the Dolomiti Mountains to Agrigento, and from bustling, cosmopolitan Rome to the canals of Venice, you will find an enthusiastic welcome, a treasure trove of artistic riches, and incomparable beauty. History buffs will delight in Italy’s diverse ethnic background, shaped by Etruscan, Greek, and Roman colonization. Wherever you may travel and in whatever season, Italy will enchant you with its gastronomic delicacies, art and music, and incredible landscapes and architecture.
ASK US INFO 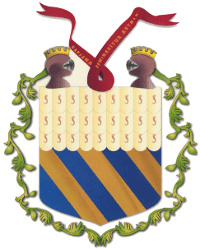